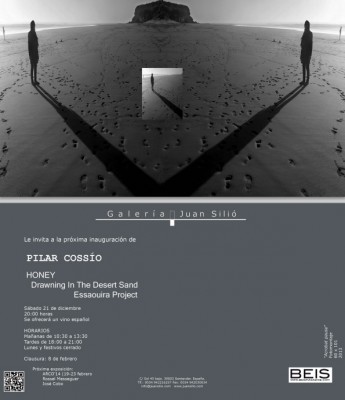 Pilar COSSIO IS ONE OF THE BENCHMARK CONTEMPORARY SPANISH ART.
And one of his most international artists.

Resident of Paris, but always closely linked to Italy
(country where he lived from 1971 to 1999 – except the two years in London 1990/92-)
From 2010 he has made some projects in Morocco and Lebanon, places that made part of the works in the current exhibition shows «Honey-drawing in the desert Sand) in the Juan Silio Gallery.
The exhibition contains photomontages, drawings, video / sculpture, which speak of his recent experience in Essaouira.
In this city she has organized recent workshop in Moroccan public school.
It has been Selected for the Biennial of Casablanca and lived several months in Ifitry (Essaouira) residence for contemporary artists.

In Ifitry she has developed a project with the theme of acrobats, starting from different schools of Africa, and the spirit of some villages funanbulista of Maghreb

The artist does not even for an instant remain in the reality shaped by reason. The dream and its surroundings are her second skin.
Getting to what is real means then disclosing a magic territory that only belongs to her and it is also her dwelling.
However, there is no doubt that that poetic extravagance makes her inspiration ability more dynamic. Moreover, it maintains a philosophical and even psychological reflexion about both the world and her own..Daniel Soutif has compiled all these under the name of transport in the catalogue of the Paris and Siena exhibitions.  Transport aims to provoke an intense feeling and sometimes a transgressive answer.
… 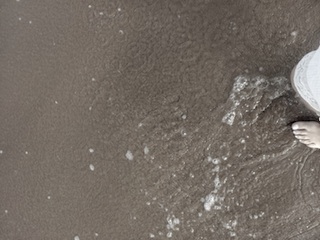