The concert at the Caffé Pedrocchi ¡n Padua has just finished. It is a normal Thursday evening ¡n the middle of a week leading up to Christmas. Amidst all the decorations and the aristocratic marble that surround me, my mind turns to Pilar Cossío and what I am golng to write to her over the next few hours. And I am going to do this ¡n the ñame of that time-honoured pact that ¡s etched on my memory, like the cold and well-sculpted marble of this legendary café in Padua. 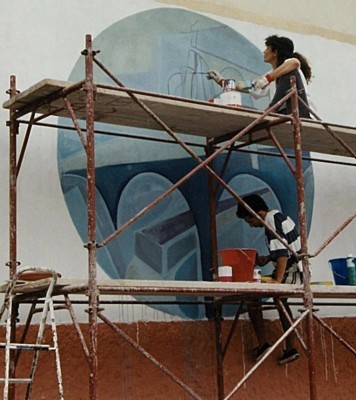 And while I am thinking of her, I realize that this concert we have just presented, myself and the rest of the PAF Trio, Antonello Salís and Furio de Castri, is the same one that has accompanied her at some of her most recent exhibitions, one of them in Cantabria. It has also accompanied a large part of the artistic career of our Spanish artist, ¡n the same way that Padua, for Pilar, is the «luogo del ritorno» and a stopping-off point ¡n that expanse that that not only joins two seas but also two histories, made up of a «capoti dimenticati» in a Parisian wardrobe and a pair of boots that have been at my house in the Tuscan-Emilian Apennines for years.

There is a thread that runs between Madrid and Paris, or between Turin and Bologna and bet-ween Sardinia (my home-town) and those Apennines located ¡n the heart of Italy:

One imaginary and immense plain, shaped by time, that has sketched out the routes of a human migration between Spain, France and Italy.

This transhumance consists of a number of itineraries that have no goal, ¡n search of a type of sentiré that focuses on an ¡mmediate inner world made up of high heels, gypsy shoes, Eiffel Tower pillars fractured ¡n the middle, girls’ faces among the rhinoceroses that inhabit savannahs that are too small, and soldiers ¡n superimposed seas.


For me, Pilar’s work ¡s African country and an enormous Lombardy expanse, where the rivers and seas may not hold any water and where the plains are enormous expanses that look towards the infini¬te, like those grey skies packed with airplanes or violet harbours of no precise geographical locationcianFurthermore, the ¡dea of walking ¡n the work of Pilar Cossío is a dynamic obsession aimed towards infinite spaces and plains.

Her grand works exhibited ¡n that mosque overlooking the sea, once again present an explicit declaration of life. Through her labour and her use of colour and symbolism, she has made that life increasingly precious.