THE FEELING OF TIME

After a long period characterised by the realisation of collages, Pilar Cossio returns to the two-dimensional light painting made of several layers in its background; animals -emblematic rhinos- whose fascinating shapes string together creating a sequence of continuous superposition.

The interlocutor’s implication in singular strategies is possible due to the artist’s great exploration both conceptually and referred to materials. Before our eyes, scenes of tridimentional migrations in enchanted territories occur, which emerge from who knows where and whose destiny will never be known. 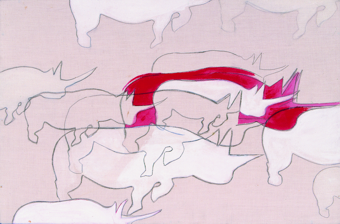 The idea of movement does not come from the dynamism of the figures themselves that come one after the other with an elegant graphic immobilism, but from an original solution which also implies works with different formats in an environmental installation of great tastefully effectiveness.

In other words, a split between support and painting takes place, in the sense that animals are drawn on the surface of the piece of material, on its sides and on the walls too without any kind of interruption. Therefore, they cover both the space restricted to the virtual representation and the space conquered to that which is real.

It is through the path of transhumance or even better, of its minimalist silhouettes that the problem of space limit of the pictoric staging is clearly highlighted through discontinuity dialect.

This time, the artist introduces the sense of Time (the absent dimension of painting) aided by and thanks to the idea of the journey giving a surprising result of opening a potentially infinite perspective for the development of her work itself.