The story of Pilar Cossio is a poetic way of living between reality and desire, awakening and sleep in search of freedom; an artistic and poetic story moving from the main drawing and painting to the collage and the photomontage; and also towards the installation, the object and the ready-mades.

A story already conceived in her childhood, looking towards the infinite horizon of the sea; a worldly and cosmopolitan story that has provoked its language and art internationalisation. In Edoardo di Mauro´s words: “A vital journey full of comings and goings”.

There is not an image more eloquent than that of Pilar at Porta Nuova Station in Turin standing with her back to the objective, to ourselves, looking into an unknown part of this closed space but looking at something, she does feel luminous – liable to be opened – something that she does foresee as liberator.

That consciousness has always been with her regarding life as a journey whose destiny is knowledge, an inner adventure in a constant state of alert in pursuit of the secret hidden by this knowledge.
It seems as if reaching and grabbing it as a closed and hermetic chest was not enough, but to apprehend, open it and deeply scan inside it so as to saturate us with its infinite substance of freedom and liberation.

The artist has always spoken of unlimited places, stays, learning periods and finding herself on the one hand, and on the other, of more neutral quandaries which only give her the necessary perspective to have a better understanding of them. 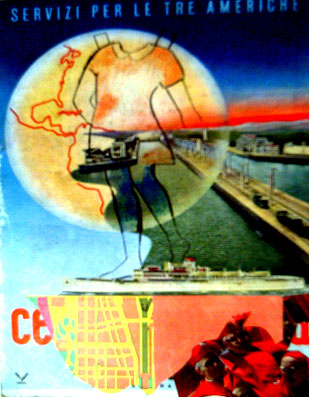 Regarding the former a turning point in Pilar Cossio´s life and work in her way towards plenitude of art –a fortunate peak where she is now – was the awarding of the grant in 1998 to live and work in London for two years. This grant was given by the Delfina Studios Trust created by Delfina Entrecanales.

What this meant for the artist was a permanent residence in the British capital that clearly marked her life because it implied a direct confrontation with international art out of the most academic and regulated – though necessary – boundaries of the most traditional Italian art.

Therefore, London was a very important period for Pilar after her initial lengthy and intense stay in Italy because, according to my point of view, it frees her work purifying it in two ways which are as follows:

Firstly, painting moves away from drawing, from that moment, it shows itself looser, in which shape and content, aspect and essence make a continuum.
At the same time, drawing acquires a much more determined independence. It gets in touch with acquired images beyond mere crafts, promoting an activity the artist had carried out – collage- in a more intimate and reserved way until then. Another important fact in the general development of her works was to abandon a recurrent and historicist theme in favour of a pictorial reflection on the closest environment, giving way to industrial topics based upon docks of the Thames. This is what Edoardo di Mauro defines as: “To posses the spirit of these places through which the artist passes with a non-superficial curiosity”.

This position that feeds on London industrial and port landscape, The Docklands, and urban references resulted in a series of exhibitions put on in Delfina Studios Foundation in London, in Palacete Embarcadero in Santander, in Florence, Turin, in Trieste and in Madrid, from 1988 to 1991.

Pilar arrives in Turin in the nineties, after having lived in London. She has her studio there, near the omnipresent Mole Antonelliana. It is there where she reaffirms in painting on the one hand, and on the other, she gains security in collage technique, which is more and more practised and meaningful. Edoardo di Mauro, the already quoted critic from Turin whose opinion is well considered, talks about “a special firm fixture which reveals the knowledge of the great paintings of the 900 (sic) above all, in what refers to the synthetic and fast brush stroke”

Therefore, landscapes of the Port of London, docks and hoppers were progressively replaced with more urban ones, such as streets, stations, tracks, various architectonic icons of the big city… all of them shaped by what di Mauro calls “plane interaction”. Carlo Carrá and Gino Severini among others, lie behind the dynamism of the brush stroke and composition lines.

Turin was what Pilar called an encounter, from now onwards referred to as stay, a “laboratory” to continue learning in the way to freedom, a place to accumulate poetic experience.

The artist tells Ivana Mulatero that Turin is “the synthesis and it was there where I really was myself… Its contradictions and its rigorous and magic essence are what link me to Turin”. However, I think that it is in this city where Pilar sets out on the symbolic path of her work, or at least the best. Seduced by the poetic magic of her gained experience when introspecting, the artist lets her first great collages flow. At the same time, her pictorial inventions – which had their highest expression in the tondos she exhibited in the middle 90s – come to an end.

Her look, our look will then move 180º towards a visual expression, she had not yet wanted to explore decisively and deeply as it was not wholly unknown to her.. A visual expression full of a wonderful poetic potentiality, where visual strength, photomontage, drawing, painting and then, ready-made combine with a wide range of possibilities.

I In spite of its independence and intrinsic value as painting, it is during these last years that the artist has acquired her complete poetic effusiveness through collage, photomontage and ready-made, and the installation, that yearned freedom of those who have reached full knowledge of material and life, that zenith which is not knowledge itself but what lies behind it.


Pilar Cossio has been referred to for years as a nomad. This is so because of the artist travels, stays and dilemmas from which we can come to conclusions of her development. Although these are more or less true, they are usually superficial but of course, never complete. The latter is because there is a parallel inner journey more difficult to know. Pilar Cossio’s inner journey, which has not ended yet but is in its highest stages of maturity, has been discerned in recent years thanks to the automatism which characterises her collage work.

Although this automatism firstly comes from chance, it does not look for it but is based upon a knowledge acquired over the years as it directly comes from intuition. Experience is what we call this acquired knowledge which is expressed through symbolic synthesis: thought and feeling journey; ecstasies, desire and love journey; maximum zenith and senses harmony. It is the movement between two realities, between awakening and sleep, in which the absence of the body and a pure state of melancholy are present.

We could also talk about the concept of Pilar’s transhumance, that temporary and fixed moving around cities where she had already lived. Anyhow – nomad or transient – the artist has gone throughout the years into her own spirit. Her collages combine and juxtapose images of very different background, technique and making, combining every kind of icons. These icons are not exactly chosen by chance – in spite of the automatism that characterises the collage – as this freedom is not allowed by the artist, in pursuit of a strongly symbolic and affectionate inner logic. In this sense, the artist says that “the work is not an end but a means. End is knowledge, that is, to encourage, to make it possible for the other’s look to perform his/her inner journey, to wake towards dream, and even pave the way to transformation”. Her collages are not then, being as automatic as they may seem or be an uncertain reflexion of her wonder, of her memory background, of the diachronism and synchronism of her life, of what is movable and the simultaneous, of the paths and stays. All of these meet towards and inside a new journey where the mere serenity and calm of a new stay, always exploring new ways, is capable of disentangling and synthesising poetically, i.e., Paris.

If Santander together , meant the root where “she created her first rudimentary flying instruction manual”; if Florence was the starting point of her artistic journey, learning, the most elaborated instruction manual; if all Italy was the learning implementation and confrontation; if London represented the cleaning and purification of knowledge and the internationalisation of image; if Turin was the synthesis……., Paris becomes, for the time being, the most successful period of her life where she can really be free. I think that it is only when Pilar has found her “hiding place” that she has been able to reveal her ego in a kind of self revelation.

Judging by the year when she moved to Paris, the last year of the 20th century, i.e. 2000, it seems that Pilar was friendly with symbolic dates or great events. Although I know that it is not like that, it seems the perfect date from which to start talking about a new period in her life. An eight-year period which leads us to the always provisional end of our story.

Paris represents the longest and most definite stay of the artist. A city which she has turned into her bureau pour femme , from which to experiment poetically with all the heavy baggage of her memory; from which to keep on creating and remaking the metaphors which lucidly emanate from her interior. Therefore, there are various fixed metonymies in her work in and from Paris. They all persistently talk about her fascinations as constants that precisely define the originality of her art: memory, ecstasy contemplation, passing of time, landscapes, cities, shoes, rhinos (a symbol of transhumance), the Empty Dot, sculptures, buildings…, melancholy and also serenity, understanding of life, knowledge and what goes beyond it, what is behind it and is already kept in the indestructible and sacred phial that only belongs to her.

Paris means the metaphors of Partenza for me, that pair of shoes on a perspex base from which she has created more than a sole version: either a sculpture-installation of a two dimension constant, or the great installation called Pavana of which Daniel Soutiff dedicated superb words in Santander and Turin exhibitions La sal, or the impressive installation Luogo a multiplied painting in the wall of Saint Theresa’s head , or the Ecstasy dedicated by Bernini in Rome which lead me to Salvador Dali´s Fenómeno del Éxtasis (Ecstasy Phenomena), his words and images found in Minotaure magazine and to the surrealistic collages in general. Paris also recalls La Ciudad de las Damas (The Ladies’ City) by Cristina Pizan, in relation to Pilar Cossio’s Bureau pour femme, that bureau at which ladies wrote. Bureau pour femme is also the title of the brand-new installation shown in the Santillana del Mar exhibition. It consists of three parts as an objectival triptych which transmits such a symbolic strength through light that it magnetises and captivates us in its embracing metonymic power. The lateral parts allude to femaleness and to transition; and the intense and blue light of the central one to the power of knowledge, a splendid and shiny light that illuminates it all.

In conclusion, Paris is not the end of the journey, but the stay where everything is more pure, creative and original.